skip to main | skip to sidebar

WASTING TIME: MY LIFE AS A PRAYER WARRIOR

This 1995 article of mine obviously isn't an interview.  But it did appear in the Door.  And, if only for my grandson to stumble across someday long after I'm gone, it may as well be online. 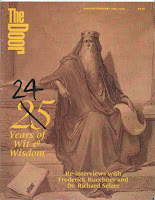 The Arse Man
This "blog" is mainly an online storage site for the pieces that I've written (1990 to the present) for WORLD, the VILLAGE VOICE, the ILLINOIS ENTERTAINER, various Salem Press encyclopedias, BLENDER, OFFBEAT, TIMES OF ACADIANA, the [WITTENBURG] DOOR, ROCK & ROLL DISC, BRASS [New Zealand], and B-SIDE. In the late-'80s, I published some poems too. All of these and $3.50 might get me a tasty beverage at Starbucks. (For the record, there are two pieces with my byline floating around the Internet--one on the Cranberries from B-SIDE magazine and one on Dr. Laura Schlessinger from WORLD--that were actually substantially rewritten by my editors. So I hereby officially disavow them.)